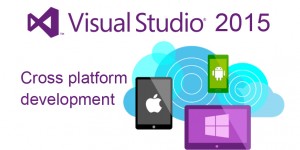 There are 3 new options in Visual Studio 2015 Context Menu:

This is the new context menu in Visual Studio 2015 in the “.cs” code file and we marked all the new options in the following list: 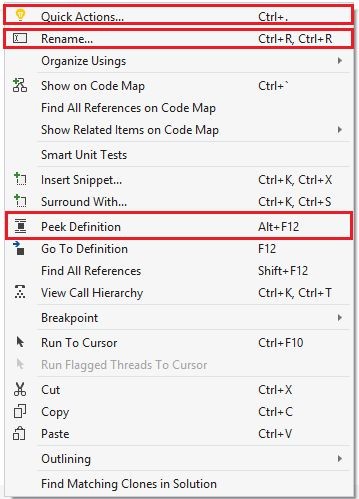 Let’s see how to use all of them. Go to Visual Studio 2015 and create a project to test all of them. 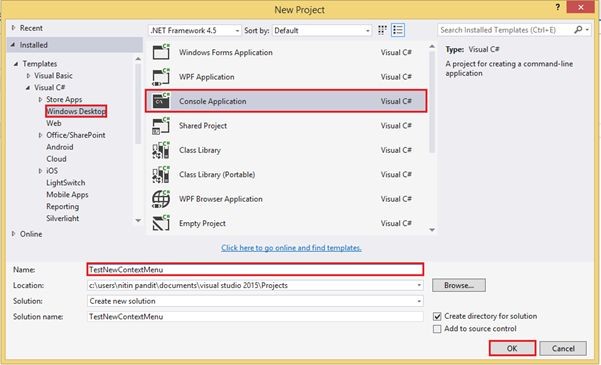 We just created a new project and opened the code file program.cs and when I click on the using statement I see a light bulb that is the icon of Quick Action. 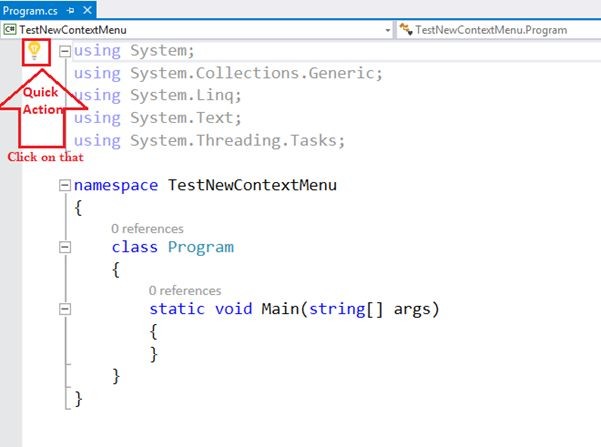 Click on the Light bulb and it’ll show you the option to Remove Unnecessary Using Statements with Preview window. 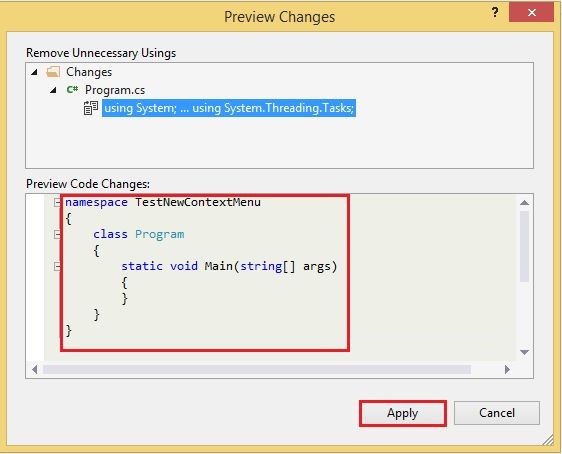 Let’s see the new example of Quick Action. If we just write the following statement to create an object of the employee class but I don’t have any class Employee Class in current project or solution then the compiler will return an error. 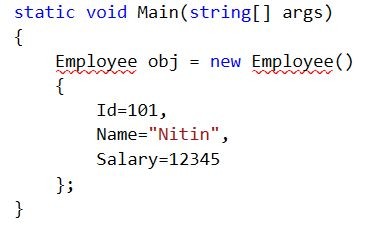 The error will be “Employee” could not be found.

And we also have a Quick Action Link in the same statement and if I click on that then that will show you multiple options to remove the error with the preview changes link button window.

If you select any option from them and click on a Preview Changes link button then that will show the new code file again that can be in your solution after apply. 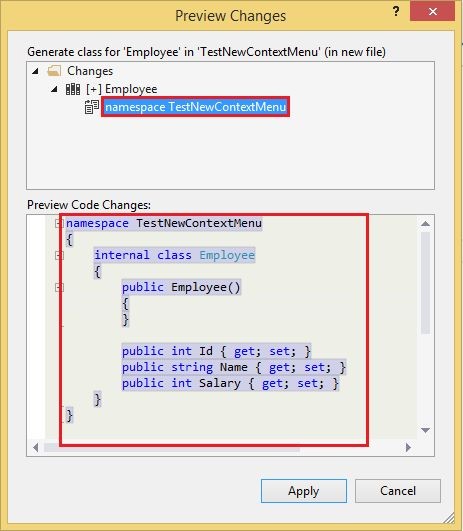 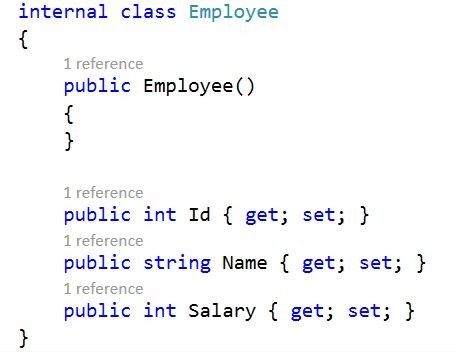 We have a class Employee that must be renamed from Employee to Emp.

Right-click on the word that we need to rename and then you’ll see a new option in the Visual Studio context menu for Rename.

Click on the Rename Option and that will open a new window and check all the options that you want to apply. 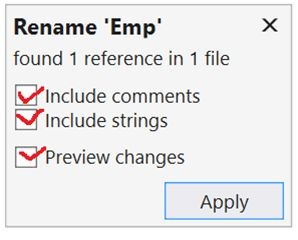 Finally Click on Apply to get the changes in your code files.

In previous versions of Visual Studio if we want to get the definition of a type, functions or a class defined in a DLL file then we can see that code using the F12 key or by right-clicking then clicking on “Go To Definition” but that will show you the code in a new tab so we need to return from that class file to that class we was at so it’s complicated to move from one code file to an other code file again and again.

Now in Visual Studio we have the new Option Peek Definition to show the definition of any class, type or function in the same code file so now there is no need to navigate anywhere from one to another code file and this is known as Preview Window, so now go and right-click on any class or function name of which definition we must see.

After clicking on Peek Definition now see the definition of that specific type or function in the same code file. So it’s a very useful option for all developers to use Go to Definition.

You can use Visual Studio 2015 to build and customize full-featured sites with good usability. This integrated development environment (IDE) is used to develop computer programs for Microsoft Windows, web applications, web sites and web services. Since it comes from Microsoft, several of the company’s platforms are integrated in the environment such as Microsoft Silverlight, Windows API, Windows Store, Windows Forms and Windows Presentation Foundation.

Designed for developers, it provides a single comprehensive development tool for creating cutting edge applications. Visual Studio 2015 allows developers the platform they need to build the next-generation internet, span any device, span multiple platforms and create applications quickly. It is extremely powerful and can produce both native code and managed code.  One of the best things about Visual Studio 2015 hosting is how flexible it is, allowing for many languages, styles of programming, styles of working, multiple platform capabilities, and the ability to lock down key component for team development. It is often noted how empowering and powerful it can be for developers to be able to use their web browsers to connect and sync up to a hosted copy of this platform and start developing in a short amount of time.

If you need best Visual Studio 2015 Hosting, we highly recommend you to HostForLIFE.eu. HostForLIFE.eu is a web hosting provider known for its professional ASP.NET hosting plans ranging from shared web hosting to dedicated server hosting that can meet the demands of nearly all-sized businesses. Over the past 8 years since its reception, HostForLIFE.eu has gained respect from both the developer and business communities. You won’t go wrong with their best Visual Studio 2015 hosting service that they have been fully tested by so many developers.